We started Keep Cool to mobilize humanity to better understand and work on climate tech businesses. Our reports are focused on education and entrepreneurialism; we cover ideas, trends, and market opportunities in climate tech. As we were writing our first report on mycelium, we also connected with leaders in the space to deepen our understanding. This included Eben Bayer, whose company Ecovative Designs has raised over $100m.

These conversations ended up being powerful, and often went deeper than the climate tech topic at hand. We gained invaluable insight into how leaders like Eben got involved in climate tech in the first place as well as inspiration for how we can immerse ourselves even deeper. This write-up focuses on our interview with Eben and launches our second content series, “Work On Climate” where we share the inspiration, advice and insight we receive behind the scenes.

Let’s imagine for a moment. You’re on a spaceship hurtling through the galaxy. You marvel at the splendor of the universe all around you — the stars, the moon… distant nebulas. And on your spaceship? Your every need is met. It’s comfortable, temperate. “Home-y,” if you will.

Believe it or not, this is the journey we’re already on. You’re reading this email while sitting first class on Spaceship Earth 🚀. No rocket fuel, space suit or seatbelt needed. Ready to learn more about our mission? We’re glad to hear it.

We had the pleasure of speaking with Eben Bayer — one of our captains here on Spaceship Earth and CEO of Ecovative Design — who came to embrace the Spaceship Earth concept through his work with mycelium.

What did we learn from our conversation?

1. What will it take to drive the climate tech flywheel? Powerful tech + 📈

Considering Eben’s longstanding involvement in climate tech, we were eager to get his perspective on whether current interest in the space is cyclical or permanent. What needs to be true for climate tech to succeed? Eben notes that a big part of the reason that “clean tech” burned out in the late 2000s was that the economics weren’t there yet:

“Technology provided all it could and the financial returns weren’t all that great...Whether you love it or hate it, capitalism is the dominant operating system on how resources are allocated.”

Since then, we’ve come a long way. Just look for instance at the price per watt in solar panels: 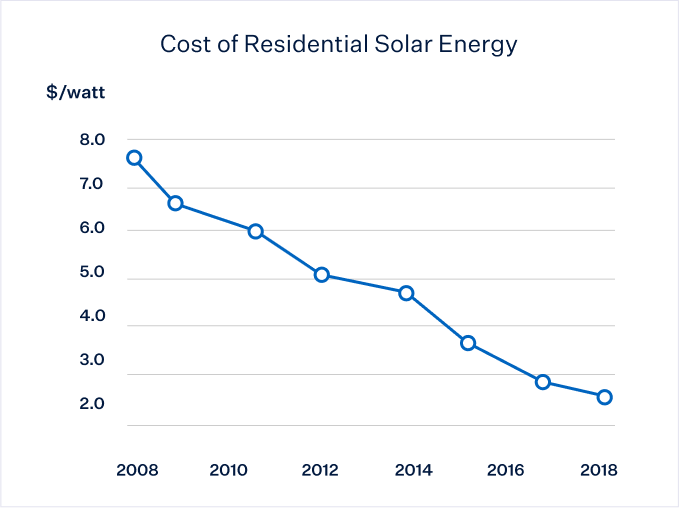 For climate tech to prove it’s here to stay, Eben says “...it actually has to [come] with a technological breakthrough that provides unbelievable economic or performance benefits, ideally both.”

This is no easy task, especially because applications like mycelium have to move physical matter around, as opposed to cryptographic blocks or numbers on a screen. That’s why Eben is bullish on biology. In his words, biology is a “cheat code for moving matter around.”

Mycelium and other applications are at the bleeding edge of providing both the performance and economic benefits that are critical if the broader climate tech space is going to take off.

In summary, what does the flywheel look like to Eben?

All of this grounds us back in the Keep Cool mission: to mobilize humanity to better understand and work on climate technology businesses.

2. How can we really shift consumer behavior? Start with ️❤️.

How do we get people more excited about climate technology and ready to spearhead work themselves? One of our hypotheses at Keep Cool is that pounding people over the head with visions of impending doom and the near-certain demise of everything they hold dear...isn’t the right path. Can we approach climate challenges with a bit more optimism, maybe even grace?

Eben outlines how Ecovative’s work in mycelium is grounded in delighting consumers and sparking joy (hey-o Marie Kondo). If a consumer tries a piece of plant-free bacon and it’s delicious, they’re more likely to try it a second time. Maybe they’ll even buy it at a store next time they’re out shopping.

Ecovative uses mycelium to create all kinds of new products that can replace existing ones that are taxing on the environment, like 🐖  bacon. And their solutions have an added benefit: They’re actually efficient, too. In Eben’s words, mycelium is highly effective because it lets you ‘grow’ products, and can be a more meaningful solution than existing processes:

The takeaway for changing consumer behavior? All you need is ️❤️ (+ great solutions).

3. Want to make a real impact in climate tech? Jump in with both 🦶🦶

At Keep Cool, we want to illuminate ways for people to get involved in climate technology. Did we mention that yet ;) ? Considering Eben’s impact in the space, we asked him to share how he got started with climate tech and mycelium. He began by reflecting on a few key role models who guided his journey.

One was Burt Swersey, Eben’s college professor. Swersey was troubled by the fact that in the early 2000s, smart people were building countless internet companies that didn’t necessarily solve real-world challenges. His class, Inventor’s Studios, was built on the belief that students and young people could do more for the world. The class syllabus? Invent something that helps people. Patent it. And build a business. In fact, Ecovative is a product of Inventor’s Studios:

“Ecovative came out of that course and wouldn’t exist without [Burt’s] incredible force of personality and belief that anyone can do far more than they realize. You just have to get out of your head and start working on it.”

So what does Eben say to operators, engineers, and founders who are interested in working in climate tech, or at least learning more about the space to start?

“The best piece of advice I ever received on this is also the most challenging to take to heart.”

Eben discussed that after graduating from college he had a role lined up at a “well-paying” engineering firm. He knew he wanted to work with mycelium eventually, and he promised Burt and himself that he’d start doing so nights and weekends, and would commit to it full-time once he got off the ground and de-risked a bit.

(Thankfully) Burt had other plans for Eben. Eben shared an amazing story with us:

“He literally called me at 7am the day I was supposed to start work and told me, ‘You have to quit your job today. If you don’t jump in with both feet, it’ll never happen.’”

Eben took Burt’s words to heart and quit his job that same day. He drove home and taped plastic sheeting up in his barn and got to work. And that was the start of his first 🍄 lab.

We think this is a beautiful lesson, not just for folks who want to take the leap into climate tech, but for anyone who has a bold idea or a passion to pursue outside their 9 to 5. At some point, we have to jump in completely, taking that risk for our ideas to gain momentum and snowball.

Another one of Eben’s seminal role models? Buckminster Fuller, an evangelist behind the concept of Spaceship Earth (legendary name, legendary vision). Here’s how Eben describes the Spaceship Earth idea:

The takeaway? Come and join the party ;). We’ve already got a spaceship that’s blasted-off and is carrying nearly 8 billion people and countless other forms of life through the universe. And there’s lots of work to be done to help make sure we have a safe, enduring, and magical ride.

4. Should we be all in on AI? Maybe, but 🐓s are also advanced tech.

The world is awash with promises of insane tech these days. From syncing our brains with computers to colonizing mars, it’s hard to keep up with all the projects being spun up that would have been inconceivable 5 years ago. And it’s easy to get sucked in, spending hours or weeks researching the latest in deep tech. We’ve been there.

However, Eben offered us a challenge that aligns well to the Spaceship Earth mission, too.

Eben described his life growing up on a farm, where he came to love chickens, cows, pigs, trees, and everything in between. He loved technology too, and studied computers and engineering in school. In a parallel universe perhaps he’d have developed a leading enterprise software solution. In this universe, Eben came to a deep insight that blew our minds: 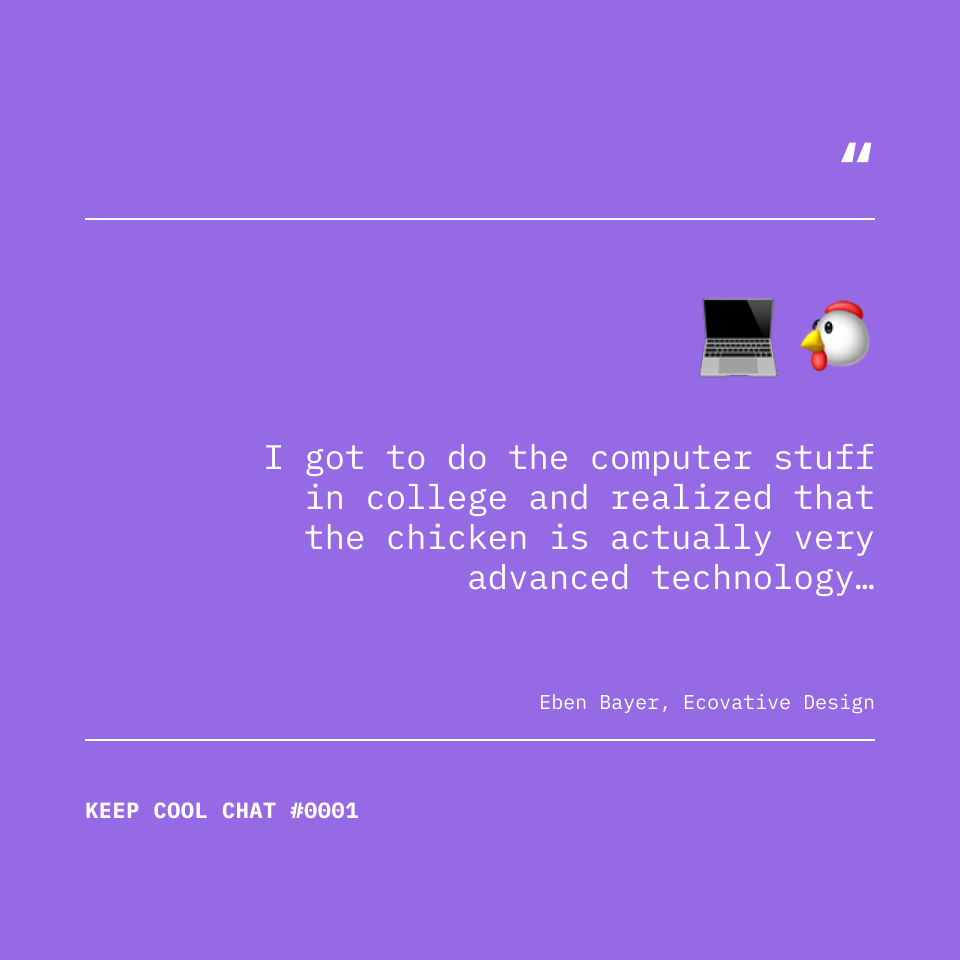 What’s this about 🐓🐓🐓 s? Eben offers us a humorous but powerful reminder that the natural world is already an amazing solution for major climate challenges. There’s no lack of ‘technology’ all around us, including applications like mycelium that are rooted in biology and have been around longer than we have. Rather than look to the ✨ or quantum computing, maybe we should look in our backyards first?

Thank you very much for tuning in. We hope you enjoyed our conversation with Eben as much as we did.

If you’re like us and have had enough with selling software and digital ads? Then we hope we provided a little inspiration today about how you can start your journey.

Interested in working with Eben directly at Ecovative? You’re in luck, the team is hiring for a whole host of open roles, and are especially looking for a strong candidate to lead their research foundry and “direct the coolest mycelium experimentation in the world.” 👀 👀 👀

Save 100+ hours of market research and accelerate your climate impact.